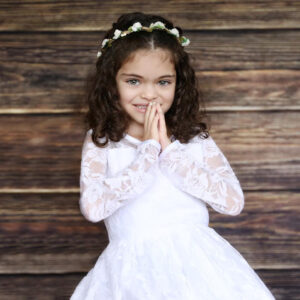 Sophia Justina: An Angel’s Call to Love and Heal

Sophia’s story is one about how a light can touch many people in a short time and continue to glow even after fate intervenes.

In July 2014, a sweet and happy girl was born into an ordinary family – but the story had actually begun several years earlier.

Shortly after getting married in 2005, John and Nermine Bakhit welcomed their first daughter, Angelina. For nearly five years, they thought Angelina would be their only child, but they later decided to try for a second.

In November 2013, Nermine found out she was pregnant with another girl. She suggested the name Sophia, which means “wisdom” in Greek. John chose a middle name to match its beauty: Justina.

The first six months of Sophia’s life were very smooth. When Sophia was eight months old, however, Nermine noticed that she wasn’t finishing her six-ounce bottle in one feeding; rather, she needed a 10-minute break after every two ounces. Sophia’s doctor referred her to a special therapist for a closer look.

When Sophia started crawling a few months later, it was slower than might be anticipated. In addition, when Sophia began to walk, she could not do so by herself but rather had to hold on to something. Nermine wondered if her problems with movement might be related to her feeding issues, which were still current. The doctor believed that according to Sophia’s growth chart, she was still meeting her developmental milestones.

After Sophia’s 18-month checkup, she appeared to be doing well with her exercises but her walking was not improving. She would lose her balance often and could easily fall.

In May 2016, while in the Bakhits’ backyard, Sophia insisted on drinking water from a regular bottle instead of with her normal cup with a straw. While drinking from the bottle, she spilled it on her clothes. When Nermine removed them to dry her, John noticed a slight inward curve in her back that neither he nor Nermine had been aware of before.

As the Bakhits continued to seek information and treatment for Sophia, they eventually learned that she had an extremely rare condition known as LMNA-related congenital muscular dystrophy, which affects every muscle in the body from the neck down, including the heart and lungs. Sophia’s life ended shortly after her fifth birthday, but her impact continues to touch people, many of which have never met her or even heard of her prior to her departure. Click here to read more about Sophia’s amazing journey and how this angel impacted so many lives.

Install this application on your home screen for quick and easy access when you’re on the go.